Where to Find Water That Would Extinguish California Fires? 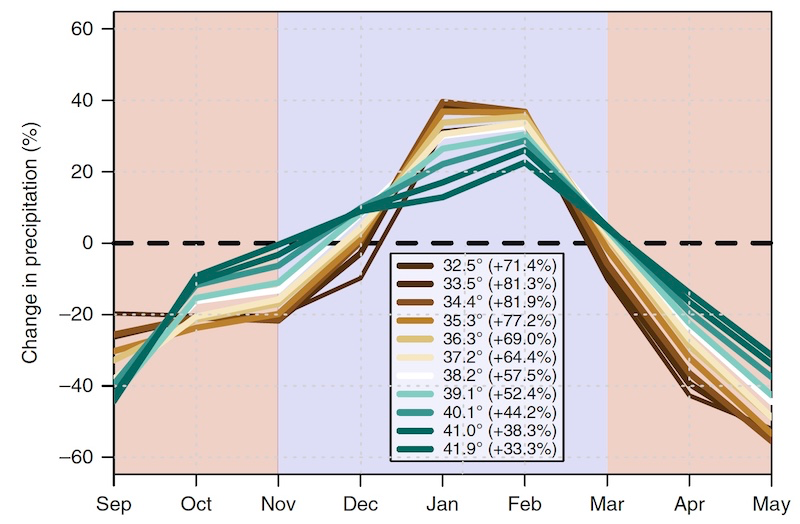 California’s economy is one of the ten largest economic powers in the world. In addition to Silicon Valley and Hollywood industries, its success is based on agriculture, which operates on systems of hydroelectric dams and the distribution of water flowing from them to support California’s agricultural needs. It is hard to predict how long this system will last. Climate experts say it will be strained by the end of the century. Is that the case? Is it possible that it might collapse within the next decade?

A historically most extensive and longest-lasting drought is still a fresh memory. We have recently heard about a skyrocketing 130 Fahrenheit temperature in the Valley of Death (+55.4°C). At the same time, large-scale fires have ignited all over California. What is next? After the highest temperatures on record, should we expect another adverse extreme? Apparently so. According to a study published in Nature Climate Change, drastic opposites are predicted in the near future. Precipitation distribution models for individual California areas provide evidence that a 25% to 100% increase in extreme dry-to-wet rainfall events will ensue in a business-as-usual scenario.

What does that mean? The rainy season will bring volatile precipitation that will likely result in catastrophic flash floods. On the other side, water scarcity in the atmosphere means that not one drop of rain will come during the extended summer. The currently occurring dry season without any rain will extend to periods three times longer. The droughts beginning in April will become a norm, and we can expect them to last until October. No rain in sight for half a year!  In other words, from one extreme to another. The drought and fires closely relate to these extremes. The lack of precipitation induces drought and fires.

Where should we look for the leading cause of such change? Simply, in watershed depletion due to a runoff canalization. i.e., runoff drainage infrasctructure. My team and I coined the term Disruption of small water cycles in the New Water Paradigm. What does it mean? The more rainwater runoff gets disposed of in the rivers and out to the sea, the less water gets recycled in the small water cycles, which results in less evaporation and, subsequently, less regional precipitation.

California’s dependence on large water cycles is a consequence. The rain accumulated from the large water cycles arrives in California during the winter months. That is when the production of the sensible heat from the dried-up terrain is the lowest, and that allows the Pacific frontal systems to enter the inland, where they condense and cause volatile precipitation and intense downpours.

Springtime brings the change—the production of sensible heat in the atmosphere rises due to severe depletion of watersheds and dry soil conditions. The intensified sensible heat prevents the atmospheric frontal systems from bringing the Pacific Ocean’s moisture inland. In other words, the more heat is in the atmosphere, the less efficient is the biotic pump that draws the moisture inland. By drying out California’s landscape, this impact is widening and multiplying.

How to abate the extremes?

The answer lies in the restoration of small water cycles. The recovery of rainwater runoff will replenish the critically depleted underground water resources. Recycling water in the local ecosystems will ensure the revitalization of the watersheds and river basins.

Suppose California people learn the importance of rainwater runoff retention in the local ecosystems, instead of draining it to the Pacific Ocean. In that case, they have a chance to avert the collapse of their economy.

During my visit to California in 2017, I have seen a platitude of unfortunate solutions, despite various civic groups’ attempts and initiatives.

I remember leaving the Climate change conference at UC Berkley and walking throughout the university campus. Please see the pictures below. The conference focused on global warming mitigation and CO2 reduction. The role of the most potent greenhouse gas, water vapor, is ignored in climate change discussions. As a hydrologist, I could not help but notice the profoundly misjudged rainwater management at the campus, where they allow the small water cycles to bleed out. The scholar and academic community do not heed the climate warnings and allow the mistakes to happen in front of their eyes. Let us look at the precipitation map of the USA. West is very dry, and the East is relatively lush. If we look at specific territories, New England experiences a 20% increase in precipitation, yet rainfall at the West decreased. We talked about it in our previous blog. There is the same correlation between hydrological cycles and thermodynamic laws at work.

An investment of approximately 20 billion USD would create 200 thousand jobs. And a result? Plenty of water in the aquifers, erosion control, healed climate, fire risk relief, end of droughts, and floods. The economy would prosper, and so would the people.

On April 5, 2017, my colleagues and I attended the Lecture of Dr. Nate Adena from the World Research Institute held at the University of California- Berkley on global business and climate change. Lots of information, studies about CO2 production from all corners of the world. As the lecture examined global contexts, my colleagues and I discerned what the university the size of a small city 40,000 strong could do for climate change recovery.

As hydrologists, who analyze the water and the impact of water status on climate change, we have mapped the university’s campus and pondered its carbon footprint. What we could observe right away was its water footprint instead.

The entire campus is situated on about 1,300 acres. Buildings and infrastructure of sidewalks and roads occupy about half of that area. A water runoff footprint is demonstrated by rainwater management infrastructure of impervious paved areas, parking lots, and roads. Rainwater management from buildings is designed to keep campus dry, to drain runoff water away. Rainwater drainage solution does not protect the natural waterways, however. All rainwater runoff is steered to flow to two streams that emerge throughout the campus. One of the streams is drained underground.

Examples of rainwater management on the campus. 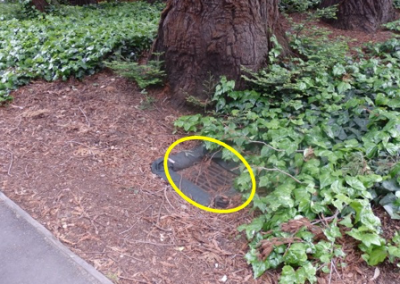 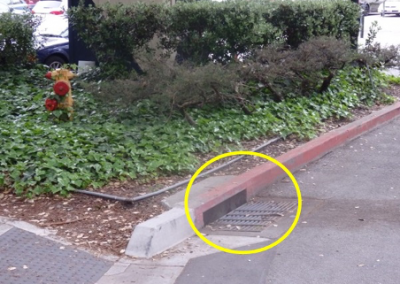 The entire area of impermeable surfaces is drained into local streams. Apparently, environmental volunteers at the university have campaigned to protect Strawbery Creek, but without practical solutions. 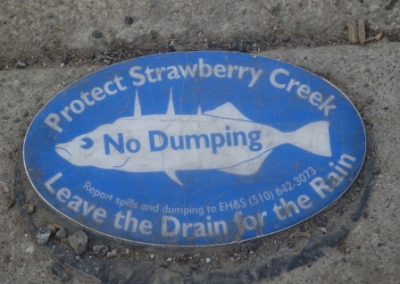 The entire rainwater management infrastructure is built to drain rainwater into local streams and out to the sea. Thick drainage pipes that are visible along the banks of the streams point to the evidence: this urban design aims to keep the city dry. 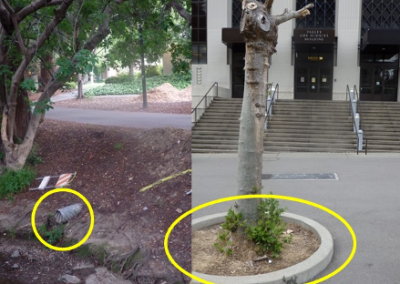 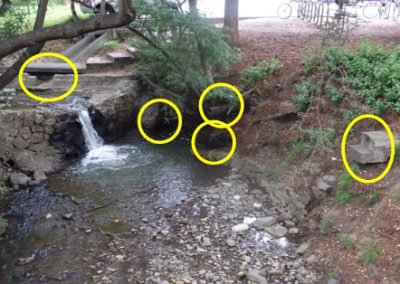 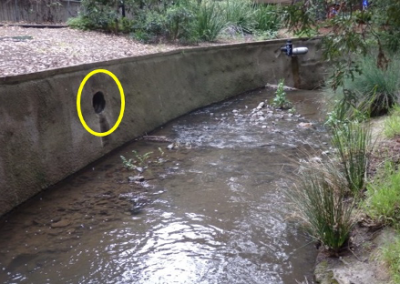 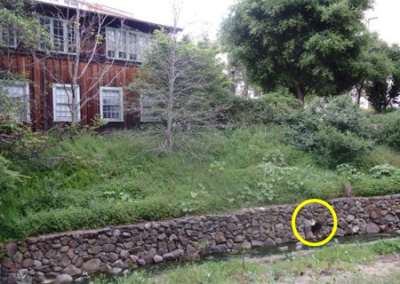 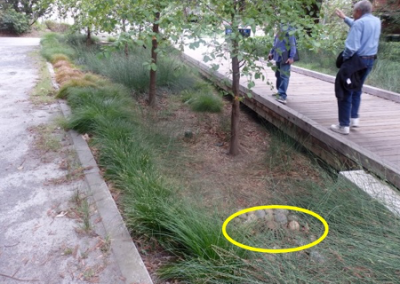 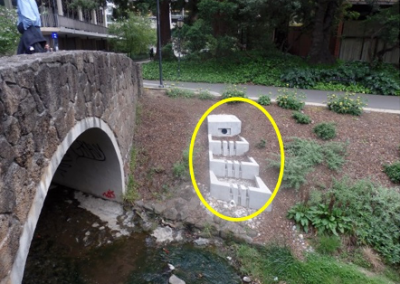 Strawberry Creek even gets diverted underground.

These outdated technologies were designed to keep California dry, right?

Why are we surprised to see the lack of precipitation in small water cycles?